The Arizona BASS Nation State team attended the B.A.S.S. Nation Western Regional on Lake Shasta May 8, 2019, through May 10, 2019. The team was made up of the following anglers.

As part of our constant effort to share fishing with anyone interested in the sport and for those that are on the edge of becoming a serious angler, we have decided to share the words of the participants for everyone to read and hopefully be inspired to get out on the water more and enjoy this sport we love.

Shasta Lake was just as beautiful and the quantity of fish was exactly as I remember the last time I was there in 1999-2000.  On the official practice days, I fished with Rick Mason from our club.  We have known each other for over 20 years, but this was the first time fishing together.  We had a lot of fun and caught lots of fish.  The Pros I fished with during competition, from Washington and Idaho, were consummate fishermen and a pleasure to meet.

It did not matter where on the lake one fished.  No exaggeration, 50 -75 fish per day was the rule.  Yes, there was quantity, but not always the quality.  The spotted bass were fun to catch and could easily wear you out, then tear up your fingers getting out the hook.  Seems they were not very selective in what they would hit; senkos, drop shot, shaky heads, spinner baits or topwater worked anywhere.  Despite all this, it was hard not to get caught up in the beauty of the surroundings and perfect weather.

BASS Nation did a tremendous job on this Western Region Tournament.  Everything about it was professional and worked like clockwork.  No live feed of the weigh-in the last two days was disappointing for all, but it is archived.

I want to thank the club for providing support for travel.  Fishing the Western Regional was a gratifying experience.  It’s always fun to meet other fishermen especially from other states and to swap lies as most fishermen do.  I would encourage all of you to fish your hardest and turn out for our work days so that you might qualify for this experience next year.

Everybody did a good job and had fun.  Congrats to Steve Lund and Kory Johnston who are the state winners and will be representing AZ at Lake Hartwell in the TNT BASS Nation Championship in November.  Best of luck and big support from our club.

Lake Shasta was a great experience with lots of Bass caught.

During my practice, I tried everything I could think of to find a pattern to bring bigger bites. Caught lots of fish on everything I tried but only caught small fish.

On day one of the tournament, the same thing nothing but small fish until I had a feeling to try a 5-inch keitech swimbait, Texas rigged, weighted on the nose by a half inch leader to a drop shot weight (kind of weird but it worked). The first cast, caught a nice smallmouth to cull out my small fish. Next cast caught my biggest fish of the tournament or practice and then upgraded a few more times throughout the day. Weighed a decent limit of just under 6lbs. Thought I had it figured out for day two, hoping to catch some good ones first thing being first flight out.

Day two blast off, my boater blew out his lower unit. We called the tournament director who gave us two options (fish all day on the trolling motor or switch boats but we couldn’t transfer fish to the new boat). My boater picked switch boats, we sat not fishing for 3 1/2 before his friend brought a boat. Fished hard the rest of the day but couldn’t get the big ones to bite. Weighed 4 1/2 pounds on day two, not good enough to make the cut to fish day three.

All in all, it was a great experience that I’m very thankful to be a part of.

I’m looking to the qualifiers this year to hopefully get to go again.

First off, I’d like to thank the entire new incoming board for AZ BASS Nation for the incredible amount of hard work that they put into getting everything together to send a team to Shasta.  As expected Shasta didn’t disappoint in numbers of fish but also as expected to find the better quality 2+ pound fish was a challenge.  For myself, prefish started out shallow looking for a bite the way I like to fish.  As I realized quickly that wasn’t going to work I moved to finesse techniques and stuck with that through practice. The final day of practice yielded better than average fish with some in the 3-pound range.

Day one of the tournament went about average as to how practice had gone with a 10lb bag.  Sticking to finesse fishing and a little topwater on day 2 I saw my bite diminish and was only able to put together a small bag of fewer than 9 pounds, in turn, missing the cut for day 3 and a shot at representing AZ at nationals.

Once again I’d like to thank the AZ BASS Nation board for their tireless I’m getting AZ Nation back on track for all of us.  Also, thank you to all the AZ Nation members for fishing throughout the year to afford me and the entire state team the opportunity to travel and fish regionals.  Congratulations to Steve Lund on his AZ regional win, he will represent AZ well once again at nationals and hopefully the classic.

Lake Shasta, what a great opportunity to go to a lake for the first time with the support of Arizona Bass Nation. As we all work hard thru the season to qualify for such an event you don’t realize how truly awesome it is until you experience it.

While some things were last minute due to circumstances for the Arizona Team, it seemed to all workout and we got some good laughs along the way. Congrats to Steve and Kody, they are sure to represent well at the next venue. Cheers to roommates Steve and Dave, lots of laughs for sure! Hope to see good turnouts for 2019 events, don’t miss the opportunity! 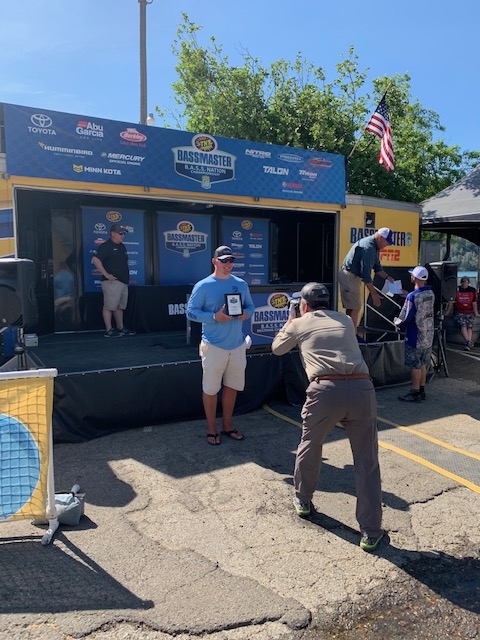 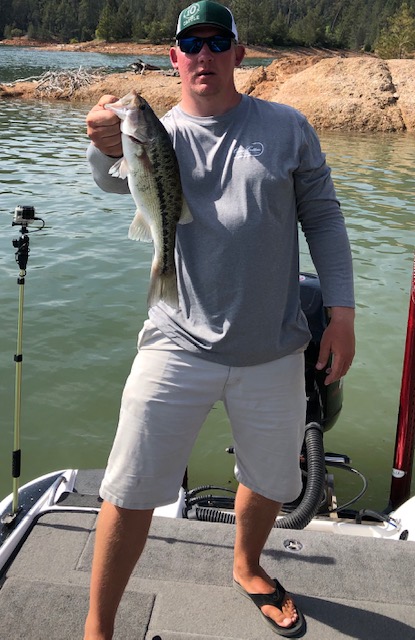 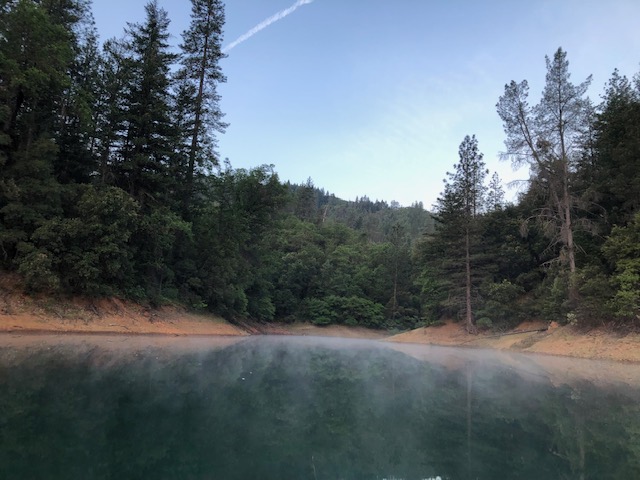 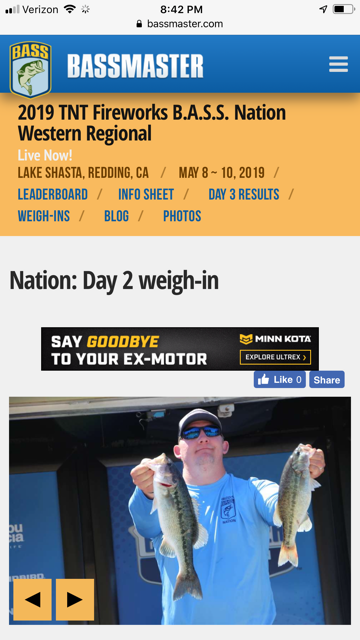 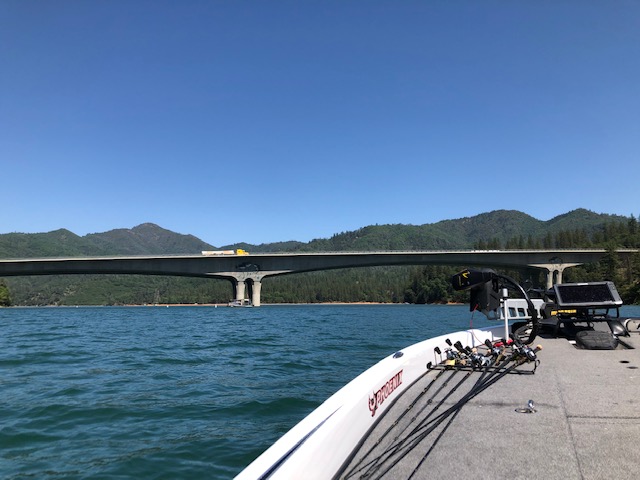 Wow. What an incredible fishery. I mean the scenery alone is enough to make you contemplate leaving the Arizona desert and packing up the family and moving but once you start actually fishing, oh boy… it’s pretty much time to call the realtor!

The fishing is something like I’d never experienced. When you hear rumors of 30,40,50 fish a day etc or “You has better bring some duck tape for your thumbs.”  At first, you don’t believe it or even pay it any mind but I can tell you IT IS FOR REAL!

I had never caught a spotted bass before this week and I didn’t know what to expect. After the first day of practice, I still couldn’t wrap my head around the sheer volume of fish in this lake. In all honesty, as I sit here almost two weeks removed I still can’t believe how many fish there are in Lake Shasta and the opportunity that lake gives anglers.

The fish there are so healthy and fight like they are Tarpons or Tuna or something. They bite as they have never seen bait before. I couldn’t believe the aggression and power these spots have. You have to fish it to believe it!

It was a week of highs and lows for most and even though we had some bumps along the road( If you don’t believe me just look at our team picture!) for me a week that will never be forgotten.

The house I shared with my best buddy and two other state team members (who are now close friends as well from the time spent in this house) was filled with nothing but laughs, awesome fishing stories and lots of fishing tackle!  The time and stories shared that week can only be described as genuinely authentic and truly unforgettable.

I was blessed enough to get three boaters that week who were willing to let me fish the pattern I had developed during practice and willing to work on catching fish “together” for the betterment of both anglers, no matter the circumstance.

After all, the dust settled and the last bag was weighed on the final day, I ended up walking away with the Arizona state team non-boater title and a trip the national championship!! What an amazing trip. A true blessing. An incredible journey.

I would like to take a moment to thank all who made this trip possible for me and the entire “Bad News Bears” Arizona state team. Without your support, this dream of mine could never have been fulfilled.

I will fish my hardest and do the best I can to represent Arizona in a positive light and show that Arizona anglers know more than just how to drop shot and hopefully bring home another trophy!! 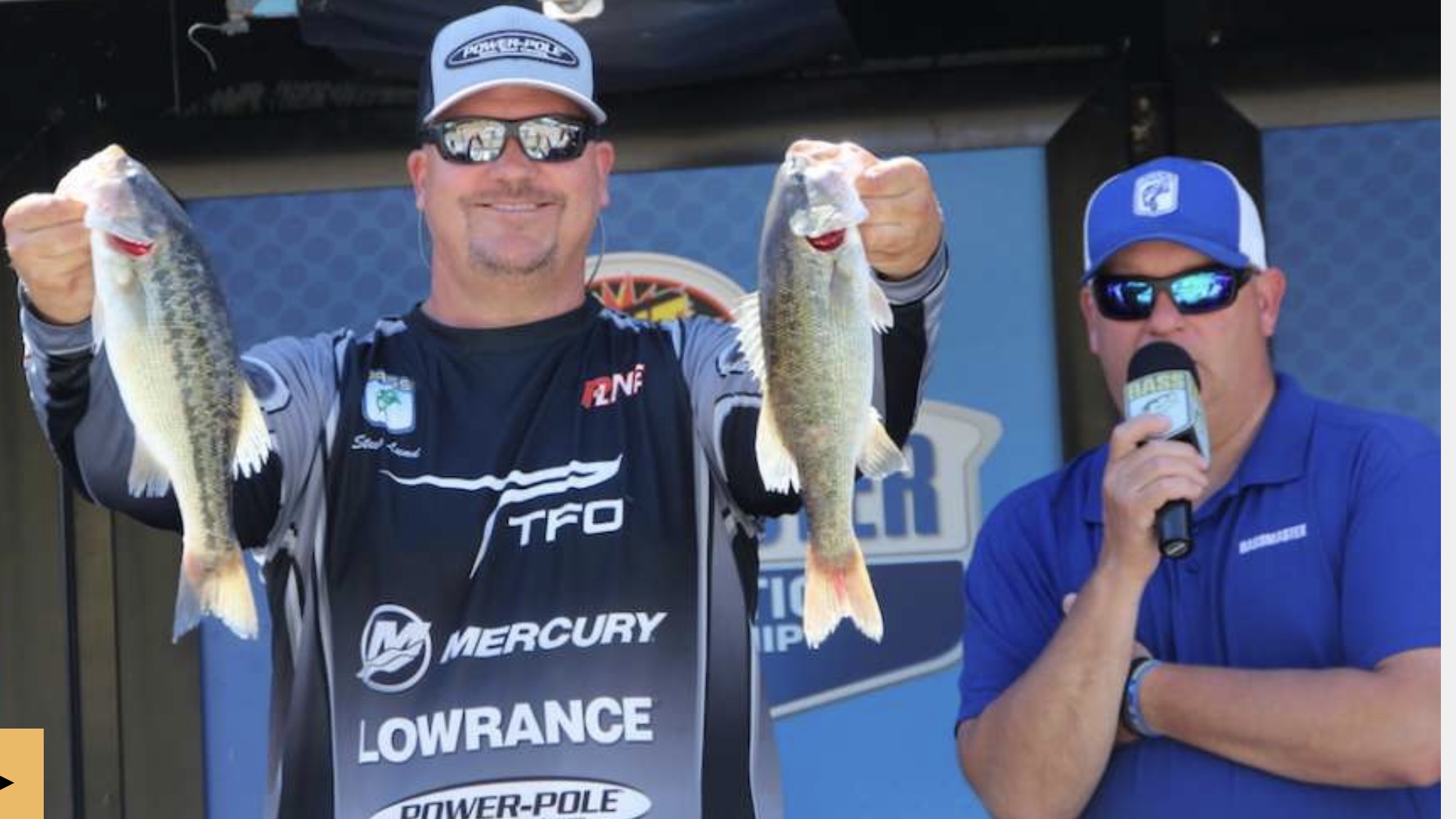 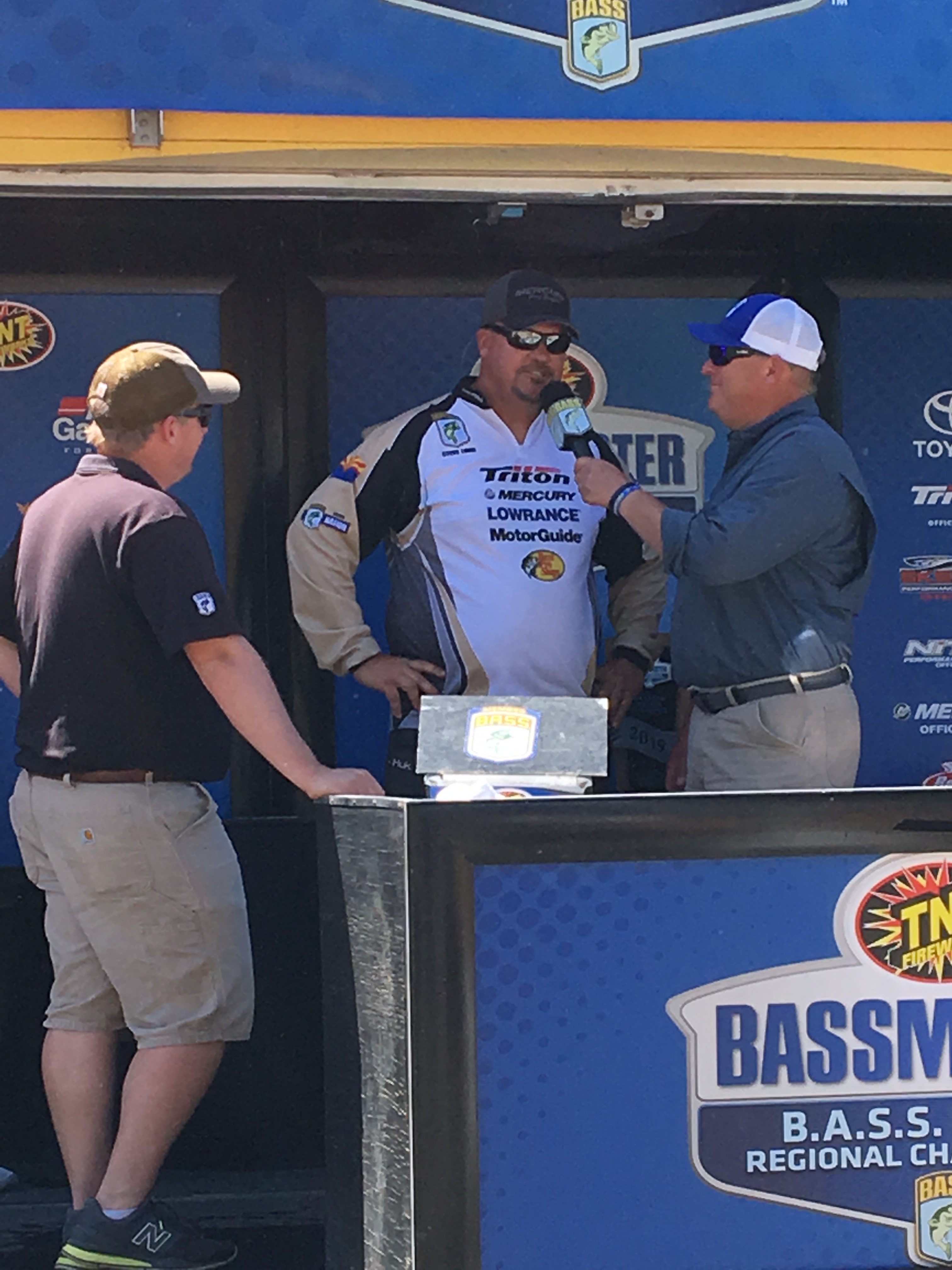 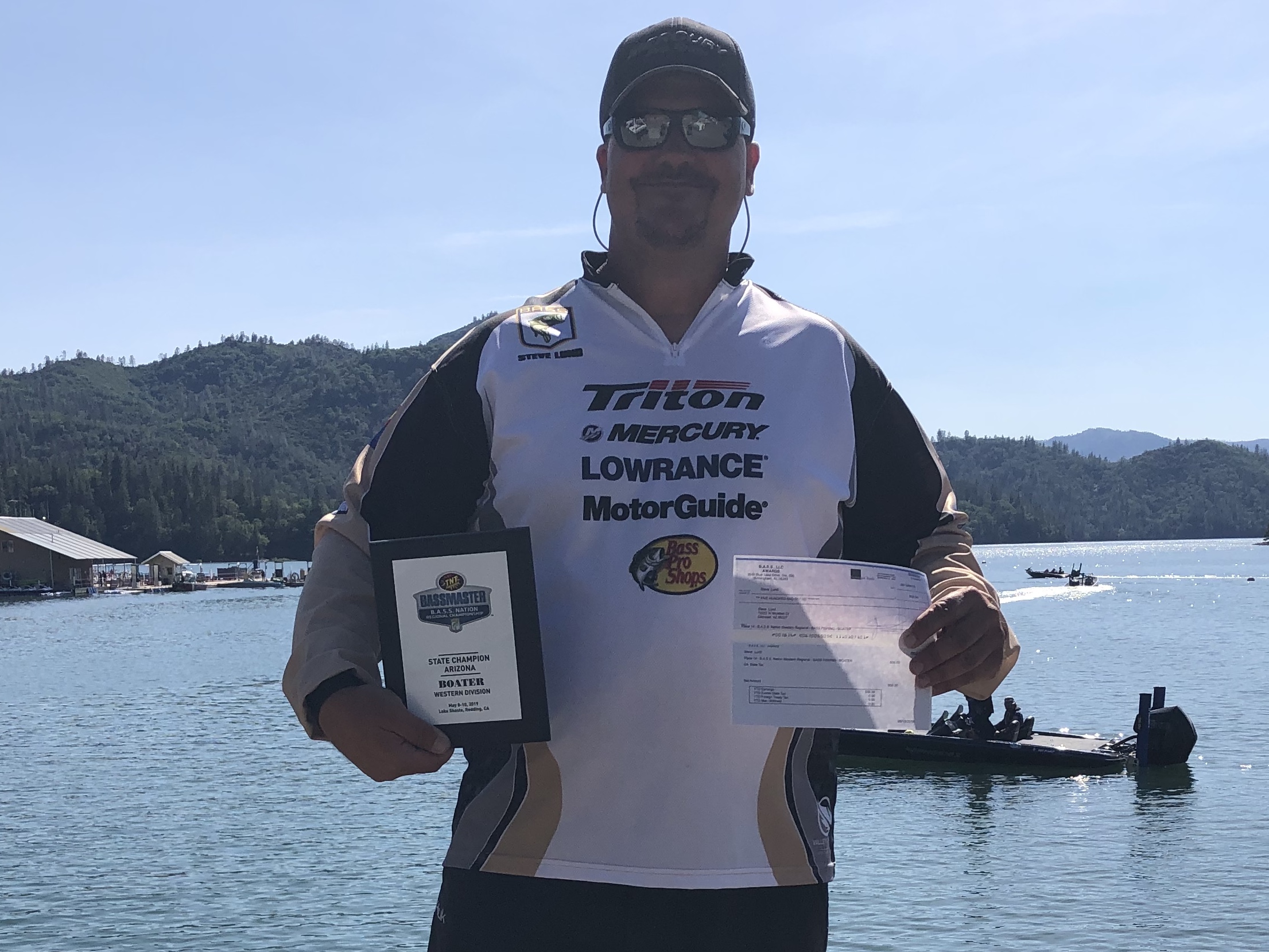 Had a great time at the B.A.S.S. Nation Western Regional Championship at Lake Shasta, CA.  Such an awesome fishery catching 50-100 fish a day! Big fish were far and few between but the small fish still put up a mighty fight for their size and catching fish never gets old. This is what it’s all about, fishing and to make the Arizona State Team to be able to experience the B.A.S.S. Nation Western Regional Championship and hopefully be able to win as a team and possibly move onto the next level of competition.

The Arizona B.A.S.S. Nation makes this all possible by providing assistance to help offset the costs of travel and lodging for State Team members to be able to compete and I and I am sure all of the anglers are very appreciative for that.

I was lucky enough to go to regionals and fish Lake Shasta. I ended up fishing seven days straight including tournament days. It was a very beautiful lake with plenty of fish and wildlife. It was hard to stay focused on fishing with so much scenery surrounding us.

If you didn’t pay attention long enough, you could easily lose a fish. The spotted bass were fast and vicious. It was my first time fishing for them and I learned the hard way quick. I ended up catching a couple of good ones in practice but had a hard time finding any with size during the tournament. I caught my fish a few different ways: drop shot, senko, neko, and a few topwater fish. I didn’t have much luck with reaction bites overall.

On the wildlife side, I saw a ton of deer, bald eagles and even a bear one afternoon. Waterfalls were not uncommon throughout the arms and cuts, far different from Arizona today at least. I appreciate bass Nation and all they did to get me there. I hope it happens again someday. 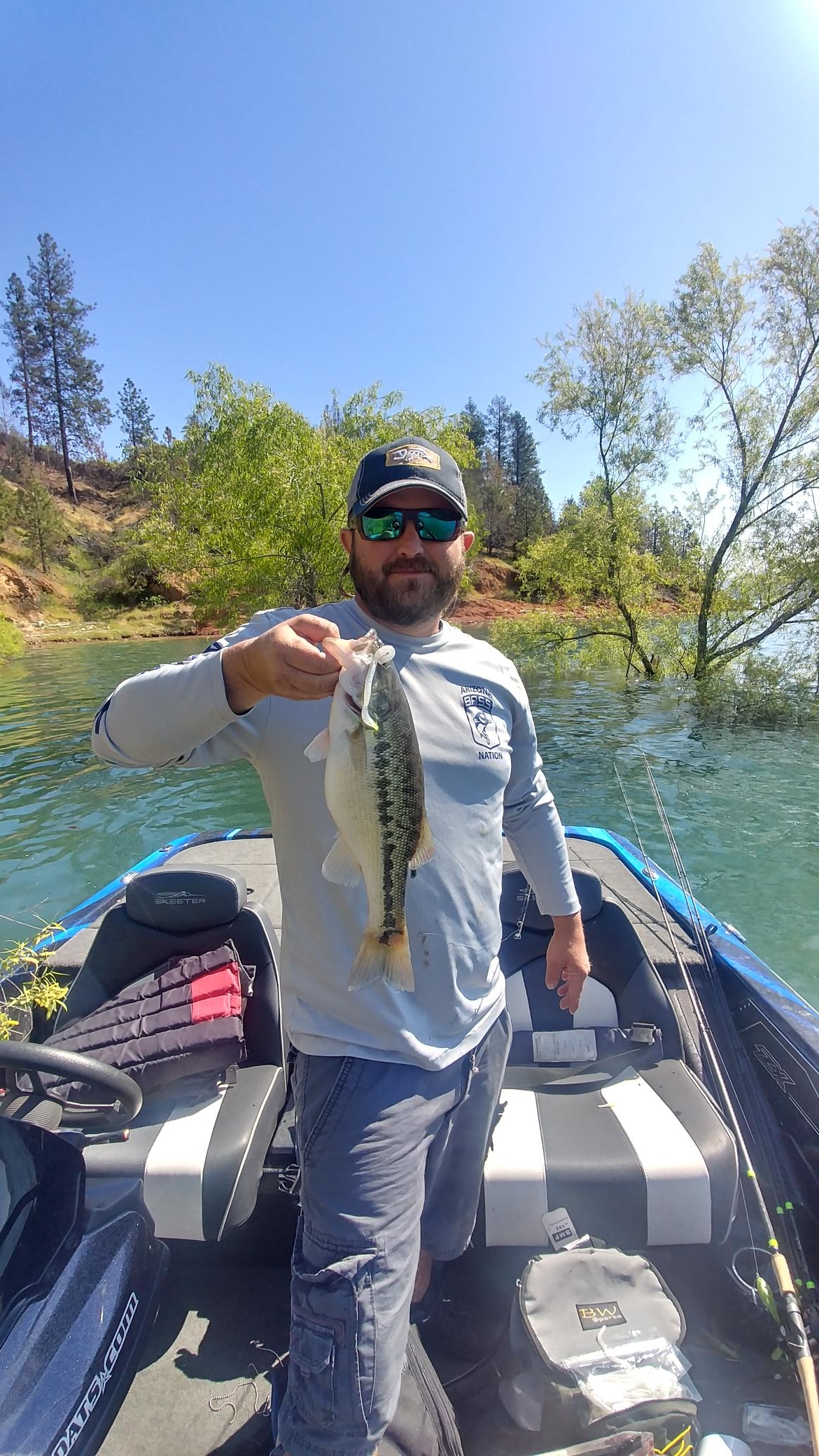 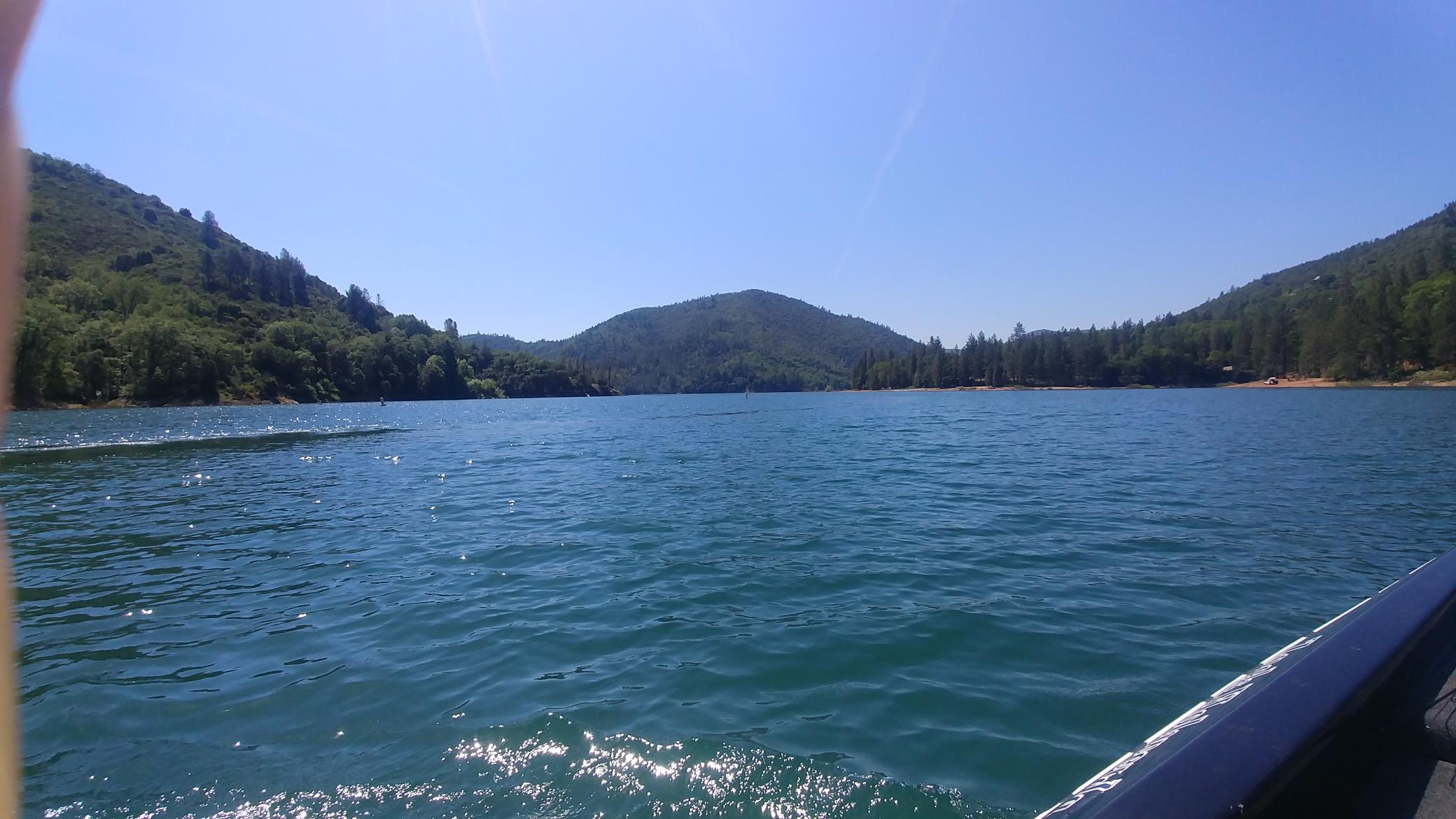 For my first time going to regional, I am glad it was at Lake Shasta.  The scenery was like nothing I had ever seen and fishing was top notch.  I was blessed enough to be able to practice with Zack Holwerda.  We were on water together every day from Saturday to Tuesday averaging 100 fish a day.

The tournament was a blast as well.  I remember being so worn out that I did not care if I made the cut to fish Friday or not.  But Zack, Steve, Kody, Jake and myself all made the cut and had the opportunity to fish the final day.  After getting some rest I was pumped to fish that final day.  I ended up in 21st place overall and 2nd place on our team behind Kody who absolutely killed it out there all week.  This was one of the best experiences I have ever had in my life.

And most definitely one I will never forget!